There’s something mystical about Paris. No doubt it is one of the prettiest cities in the world. But it’s more than that. If I had to put it in words, I’d say it makes you feel truly alive. The city has an infectious positivity. A feel-good factor that’s highly contagious.

You’ll never run out of things to do in Paris. Because of this, planning your itinerary might be a little challenging, especially if it’s your first time. Hence, I’ve curated this list of 21 things to do which can guide you on your first Paris trip.

Things To Do In Paris On Your First Trip

1. Take a walking tour of Montmartre

Montmartre is one of the prettiest neighborhoods in Paris. So, it easily makes it to the list of top things to do in Paris. 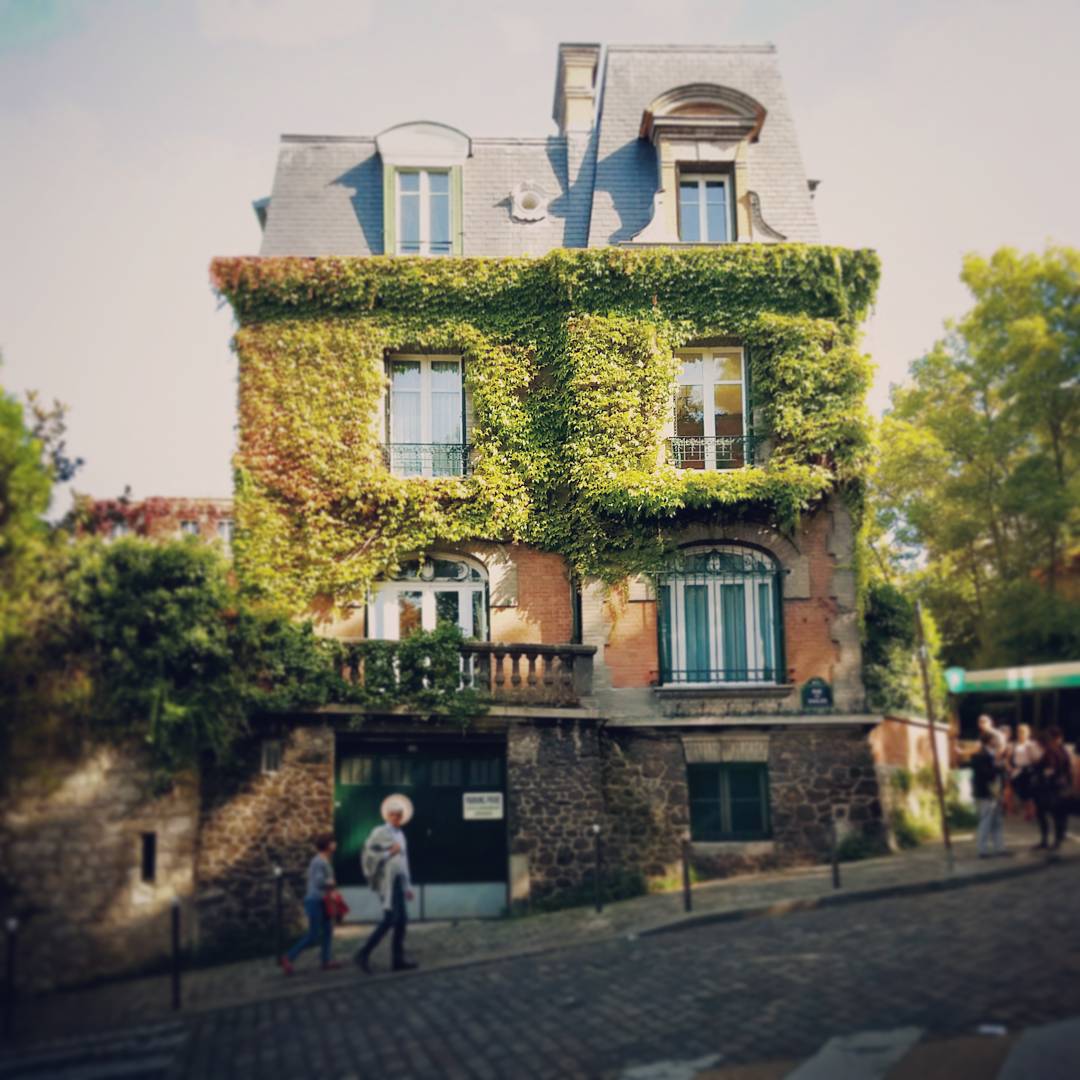 A walking tour is undoubtedly the best way to explore it. Discover Walks conducts some amazing free tours of various areas in Paris.

These are a great way to save some money in the otherwise expensive city of Paris. Also, you get to learn some amazing stories about these places from locals on such tours.

You’ll be surprised to know that Montmartre was a separate town at one point in time! Even today, the people of Montmartre have their own system and are quite independent of Paris. The place is home to many cabarets with Moulin Rouge being the most famous of them all. 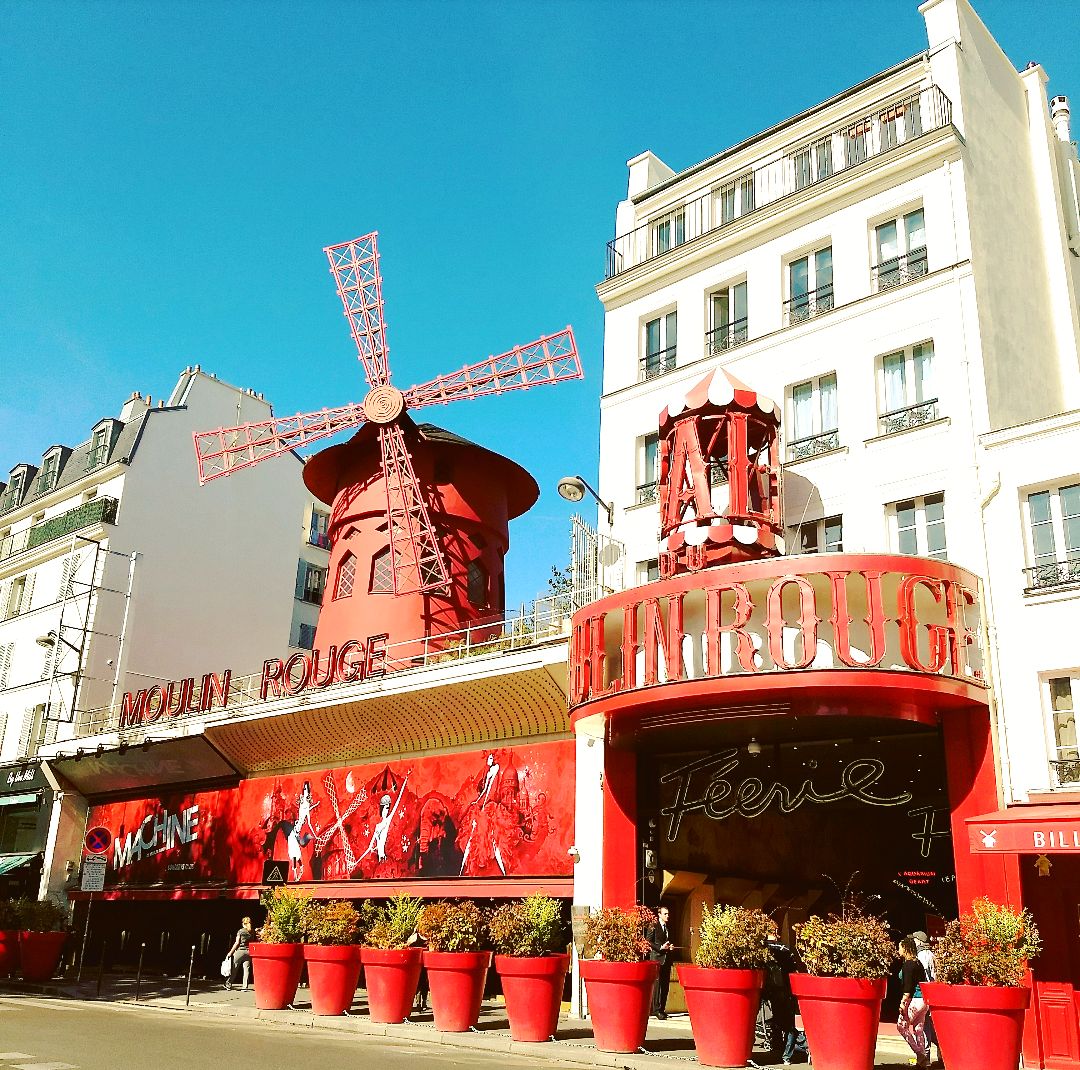 It is not uncommon to see street artists working on their beautiful creations here. The area is quite cheap as compared to the rest of Paris. You can buy some of the cutest souvenirs here at great prices.

2. View the city from the steps of the Sacre Coeur

Another important reason for visiting Montmartre is the Sacre Coeur Basilica. It is one of the most beautiful architectural works you’ll ever see! Situated at the highest point in Paris, you get to see some spectacular views of the city from its steps. Certainly one of the best things to do in Paris. 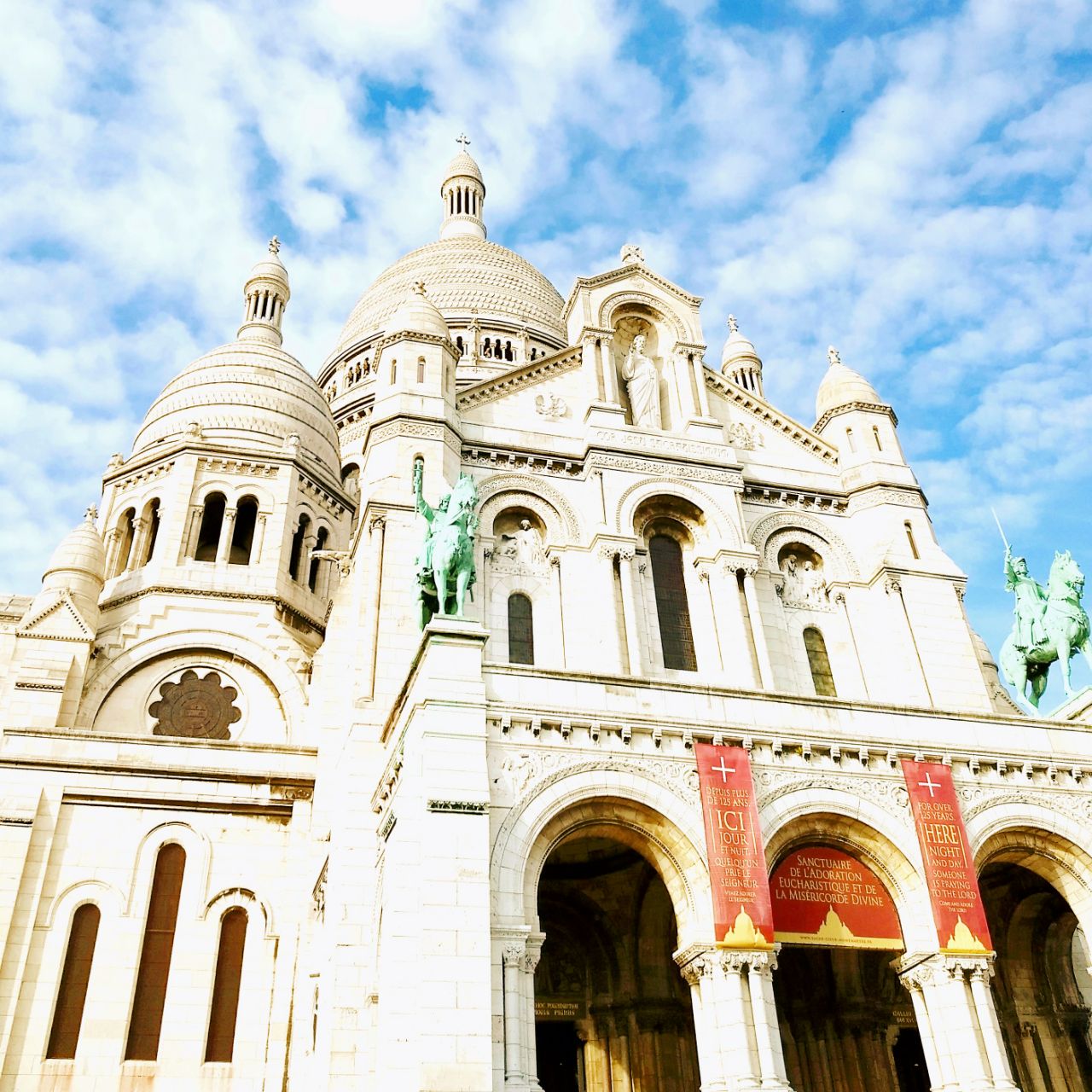 The Place de la Concorde is a massive town square adorned with beautiful fountains and statues. It was built in honor of King Louis XV and was originally called Place Louis XV. 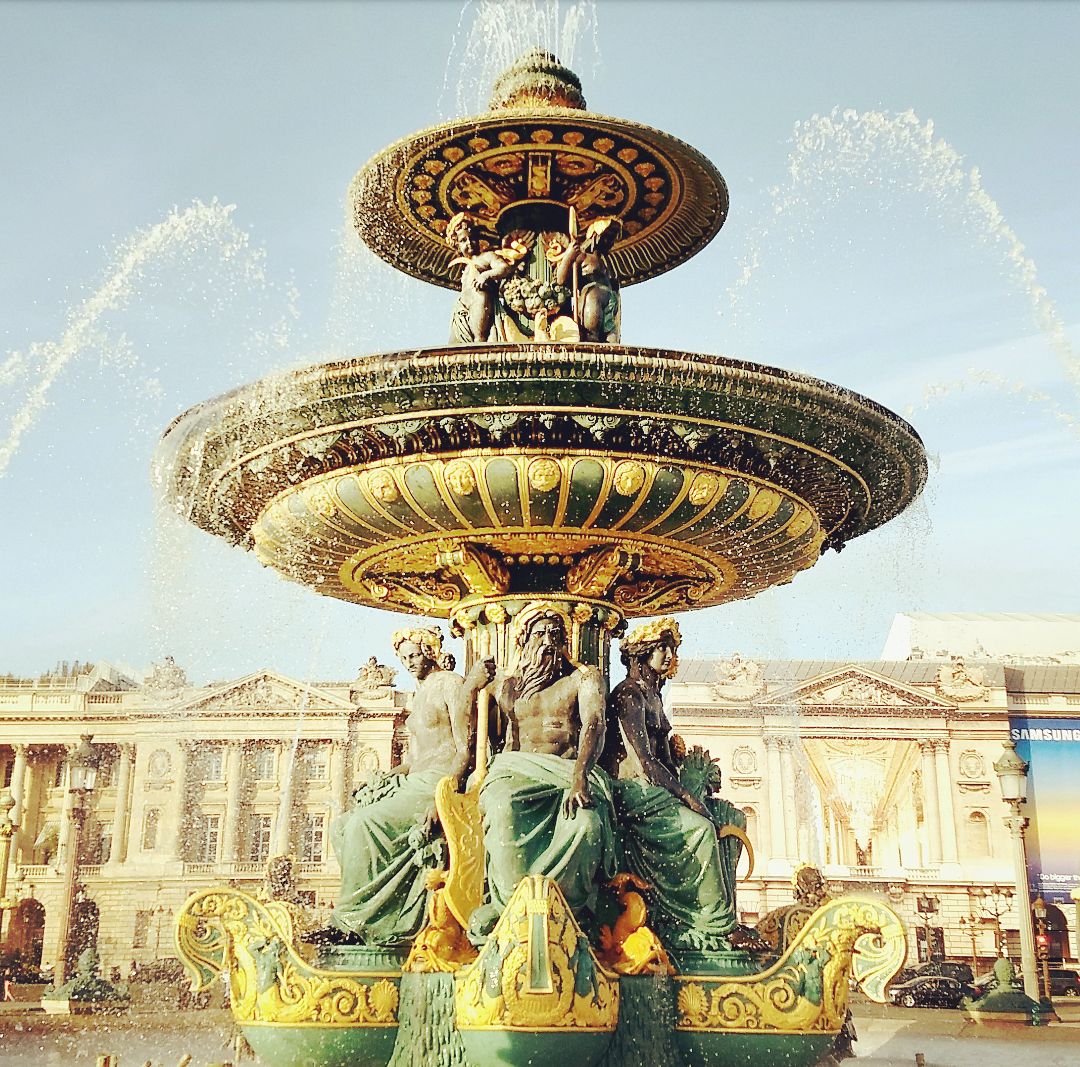 The place also housed a statue of the king which was demolished at the time of the French Revolution. At the time, the area was also renamed as Place de la Revolution. 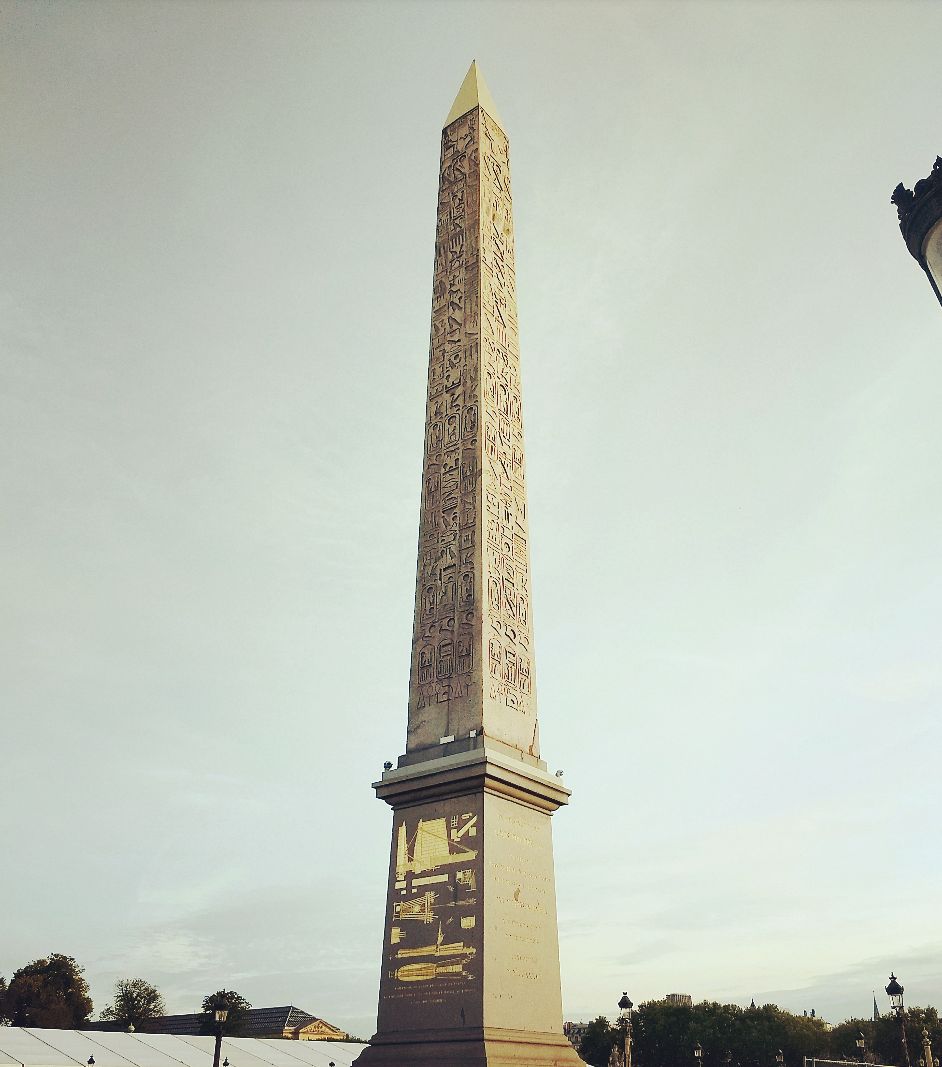 The obelisk here is from the Luxor Temple in Egypt, which was given to the French by the Egyptian government in the 19th century.

Here’s one of the quirky things to do in Paris. If you’re tired from too much walking around Paris and want to try something fun, ride a Tuk Tuk. You’ll find these in most of the touristy parts of the city. They have fixed fares (not the cheapest) and there’s no bargaining to be done.

Our Tuk Tuk driver drove us to the Pont Alexandre III from Place de la Concorde for 10 Euros. We didn’t mind as our feet were killing us, and she played some funky middle-eastern music on the ride too!

The Parisians are capable of throwing in some art and making even the most mundane things beautiful. The Pont Alexandre III is a glaring example of it. 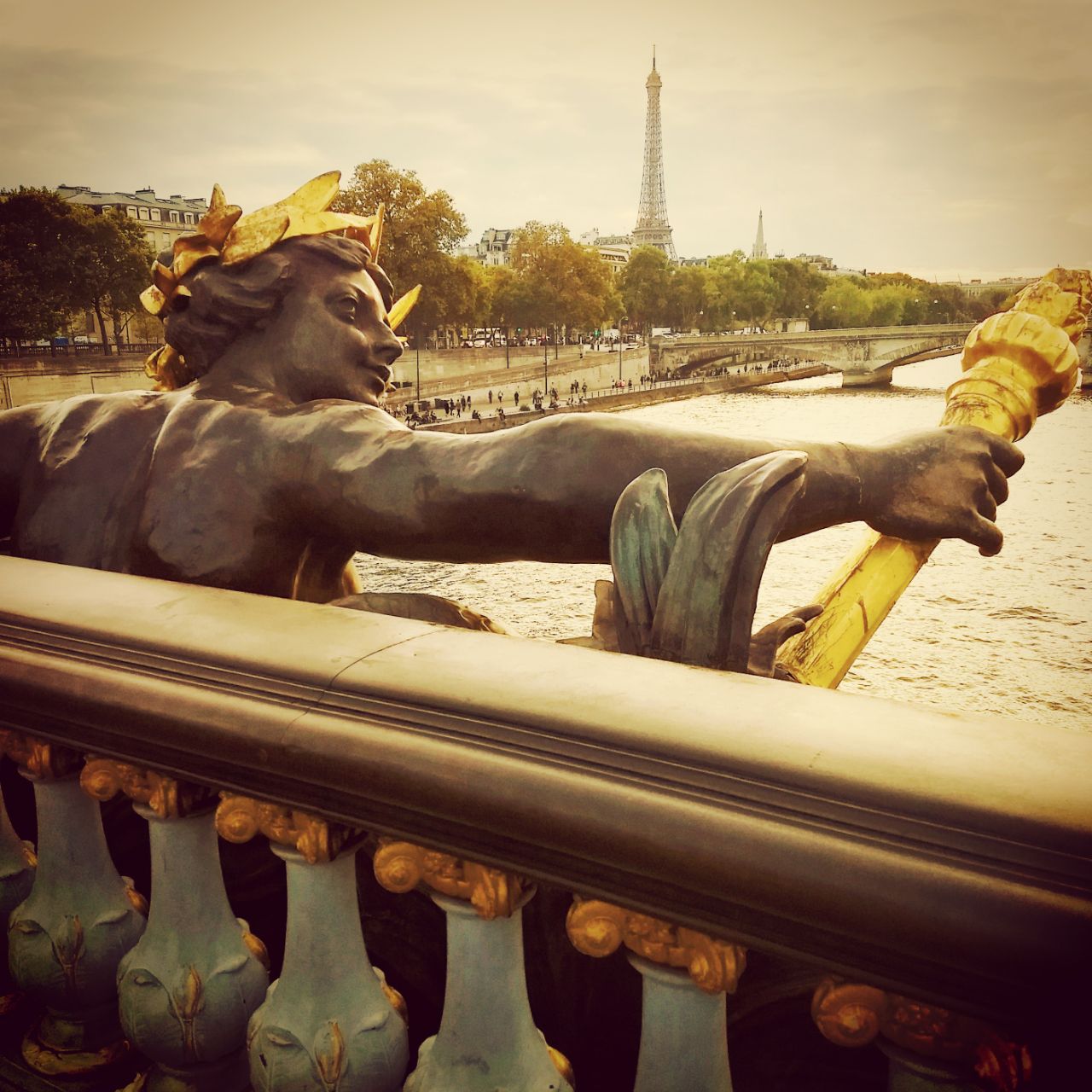 It is the most intricately designed bridge I’ve ever seen. Head over to the Pont Alexandre III in time to watch a gorgeous view of the sunset beyond the Seine. As the street lights start to glow, the bridge transforms into a magical place. This definitely is one of the top things to do in Paris. 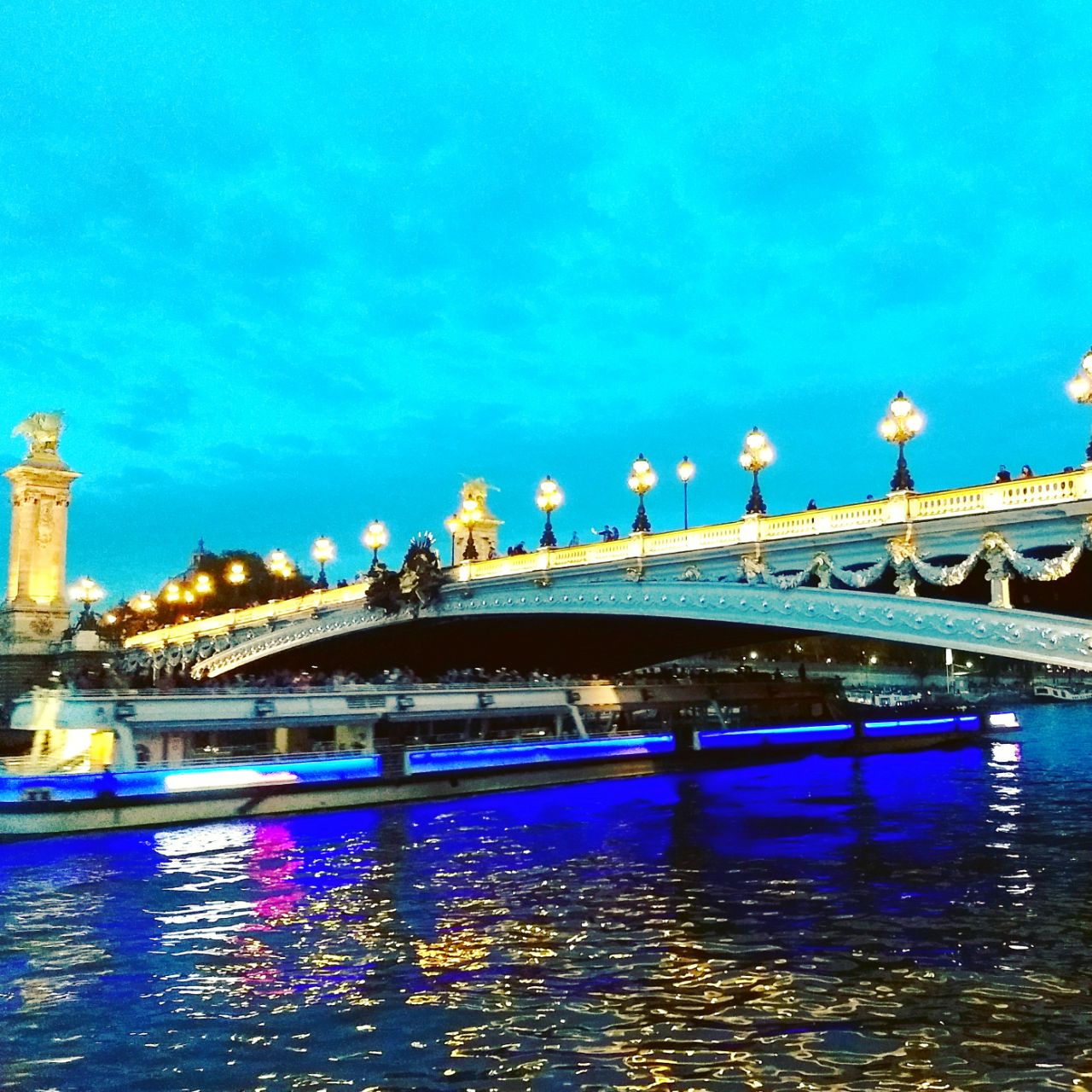 6. Grab a drink at Faust

After sunset, you can head over to Faust, right below the Pont Alexandre III and grab a drink. The open-air pub, by the banks of the Seine, provides an amazing ambiance for spending a nice evening in Paris. Definitely one of the top things to do in Paris, the city of lights. 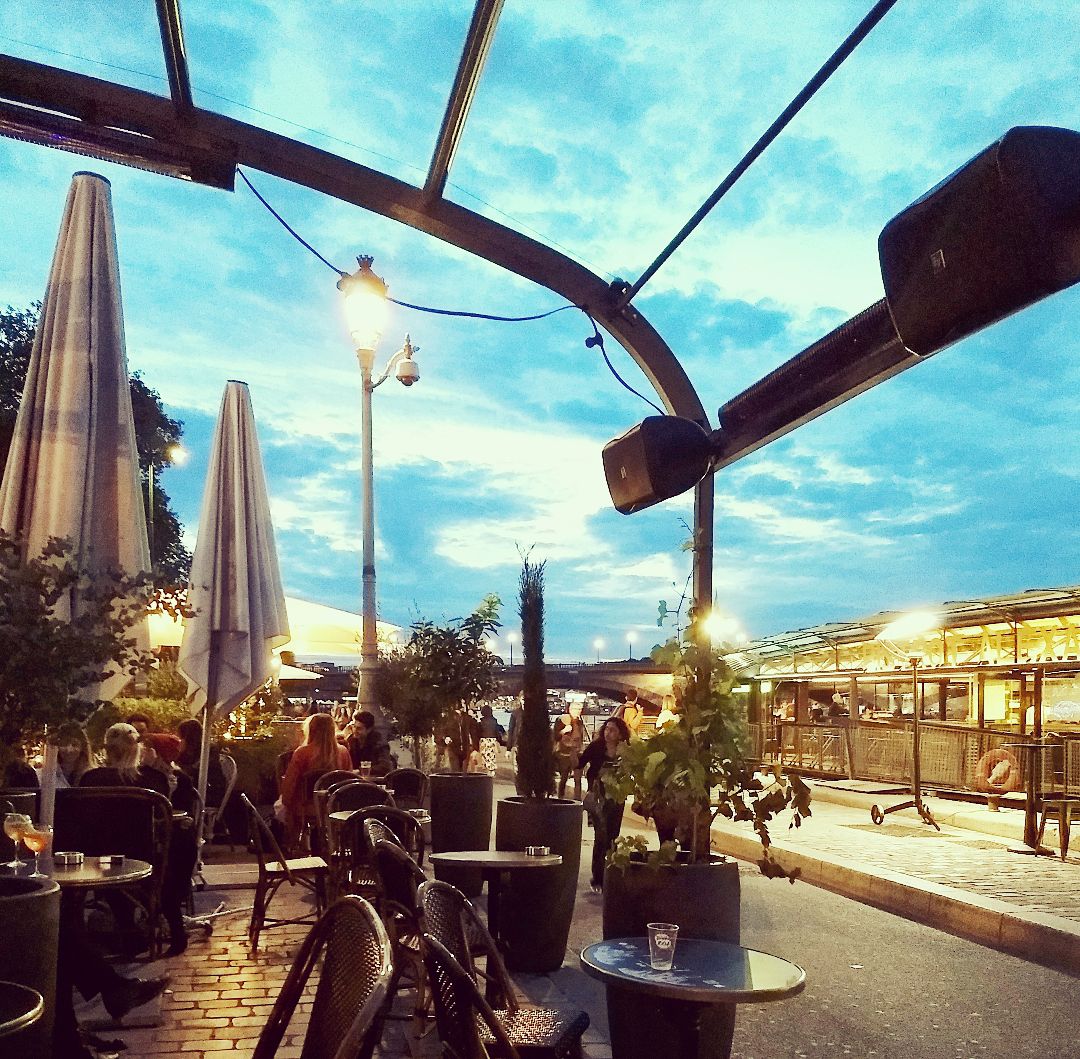 7. Try as many local dishes as you can

One of the major Paris attractions is the food. When in Paris, never pass up a chance to try some local food. My personal favorite is the Croissant. Begin your day with this savory goodness and you’re bound to have an amazing day! 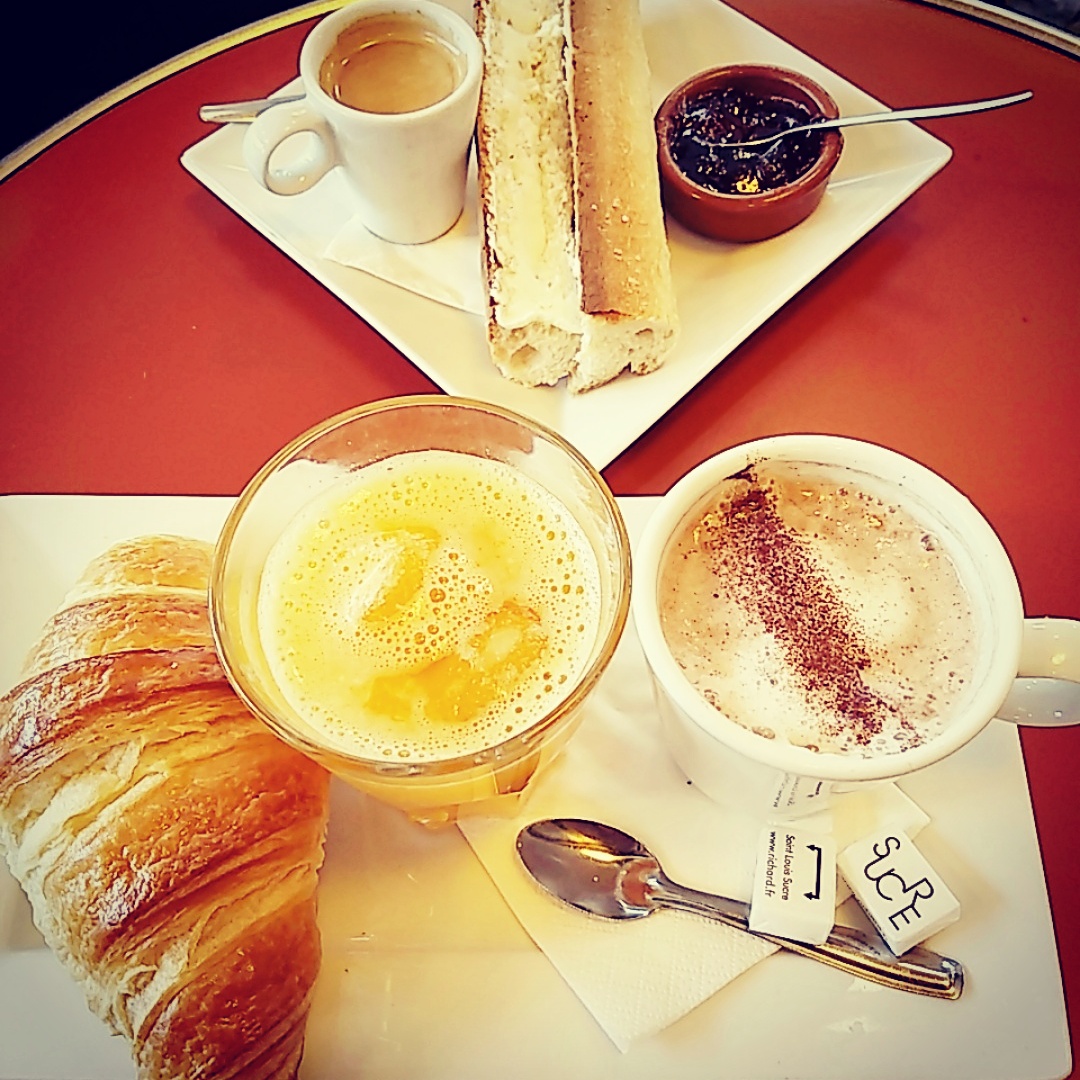 A visit to the Palais Garnier or the Paris Opera is one of the best things to do in Paris regardless of the weather or season. 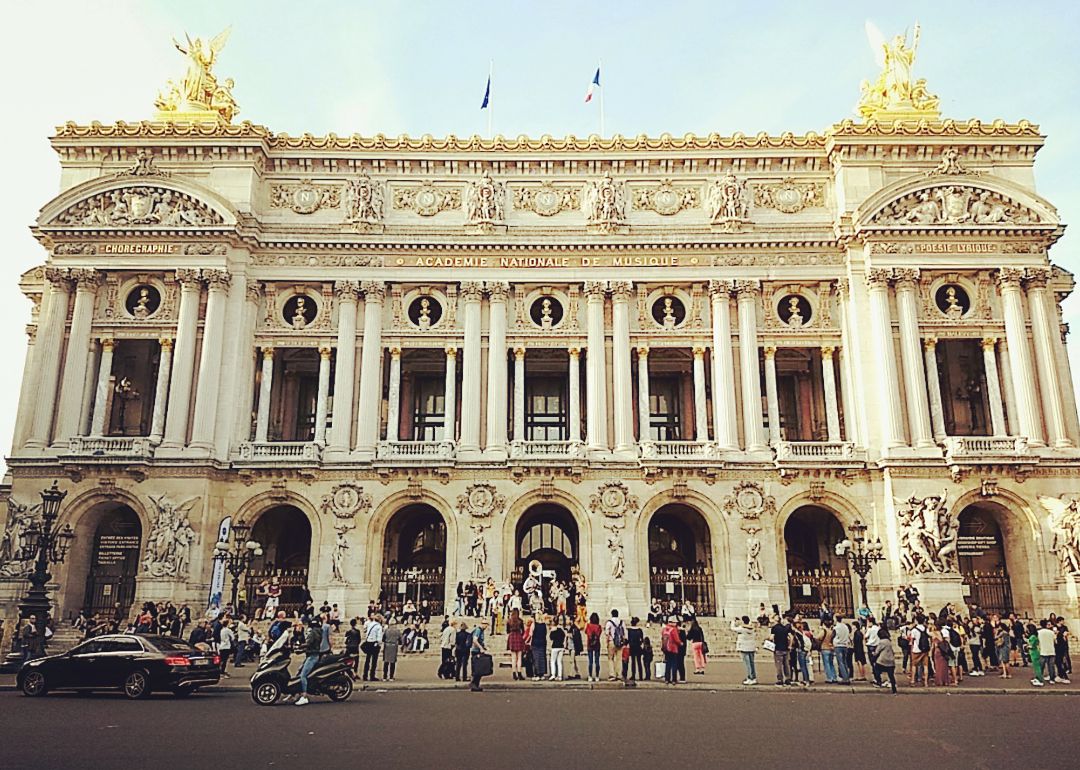 If you’re a lover of intricately designed architecture, you shouldn’t miss this. The Opera showcases some of the most amazing chandeliers, statues, and a gorgeous artwork on the ceiling.

PRO TIP: The Paris Pass grants you entry to a guided tour of the Opera.

9. Go up to the Eiffel Tower Summit

READ MORE: 18 Hotels in Paris with Views of the Eiffel Tower 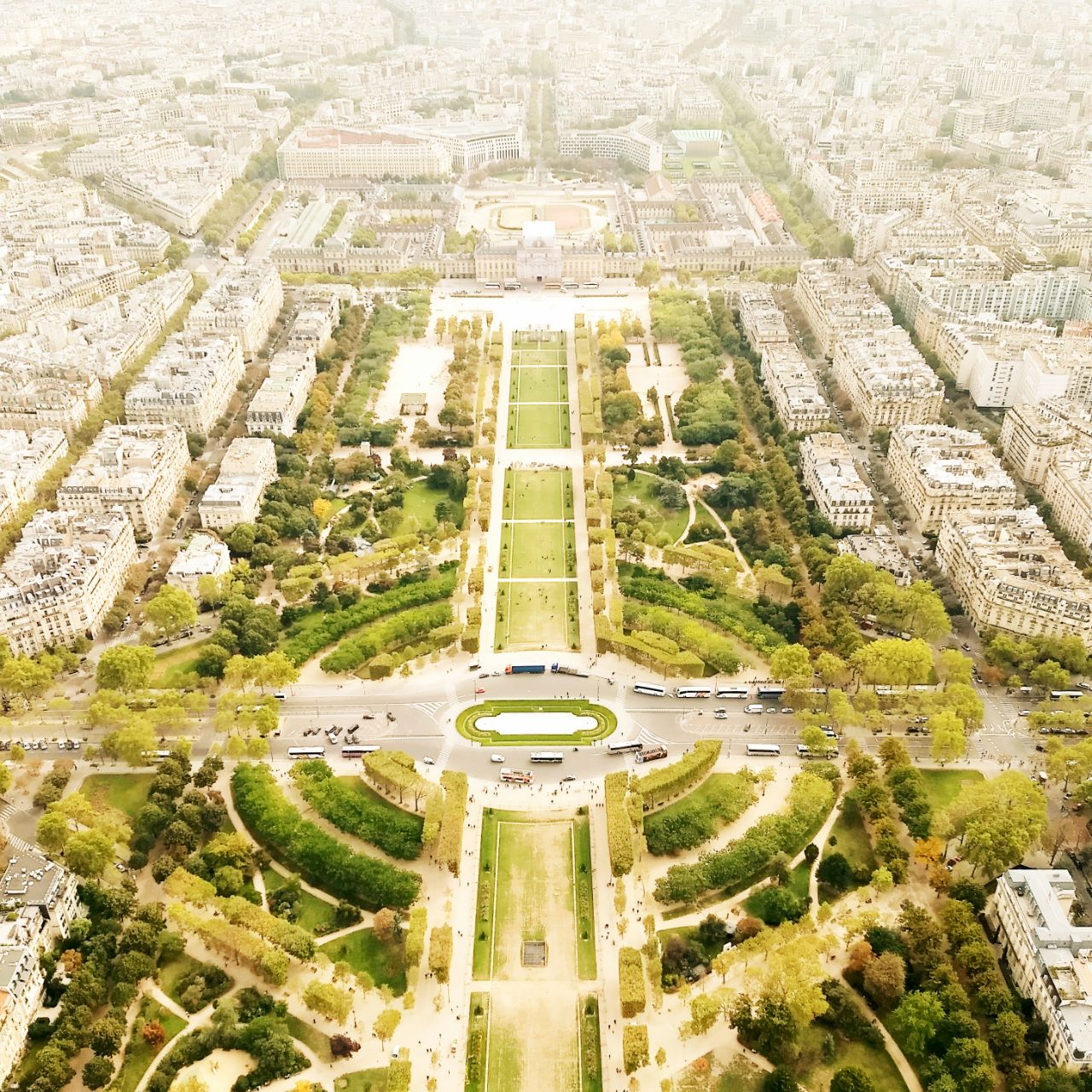 The Champ de Mars lies at the foot of the Tour Eiffel. It is a beautiful park where you can sit down for a picnic lunch or simply take photos of the tower up close. Needless to say, a visit to the Eiffel Tower summit and Champ de Mars are among the best things to do in Paris. 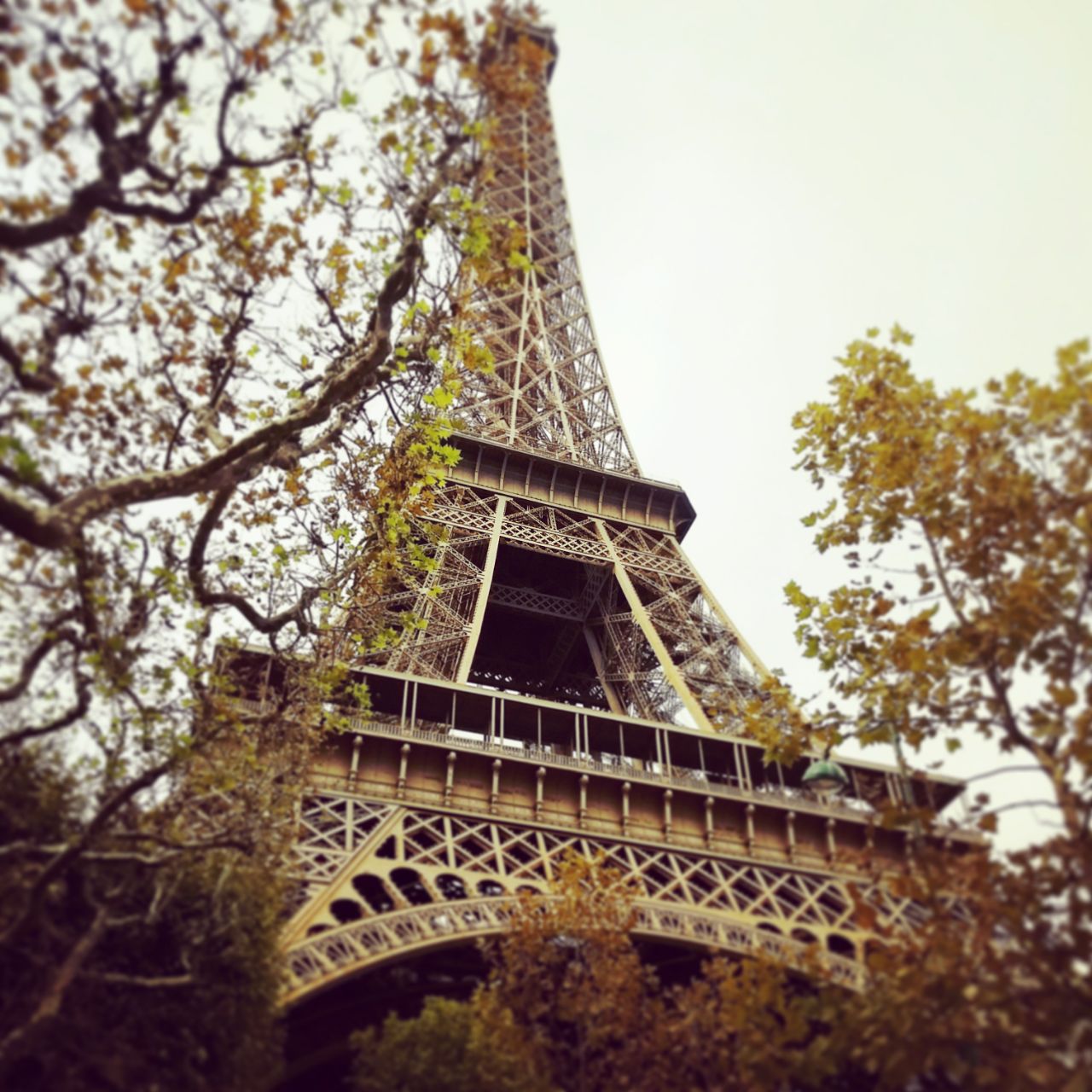 10. Climb to the top of the Arc De Triomphe

Another beautiful monument in the heart of Paris where 8 of its main streets merge. If you climb to the top, you’ll get a stunning view of the 8 radiating streets and the houses in between. The beautiful monument was built in memory of those who fought and died for France. You can see their names inscribed on the walls of the Arc De Triomphe.

Pro tip: The Paris Pass grants you entry to the top of the Arc De Triomphe. 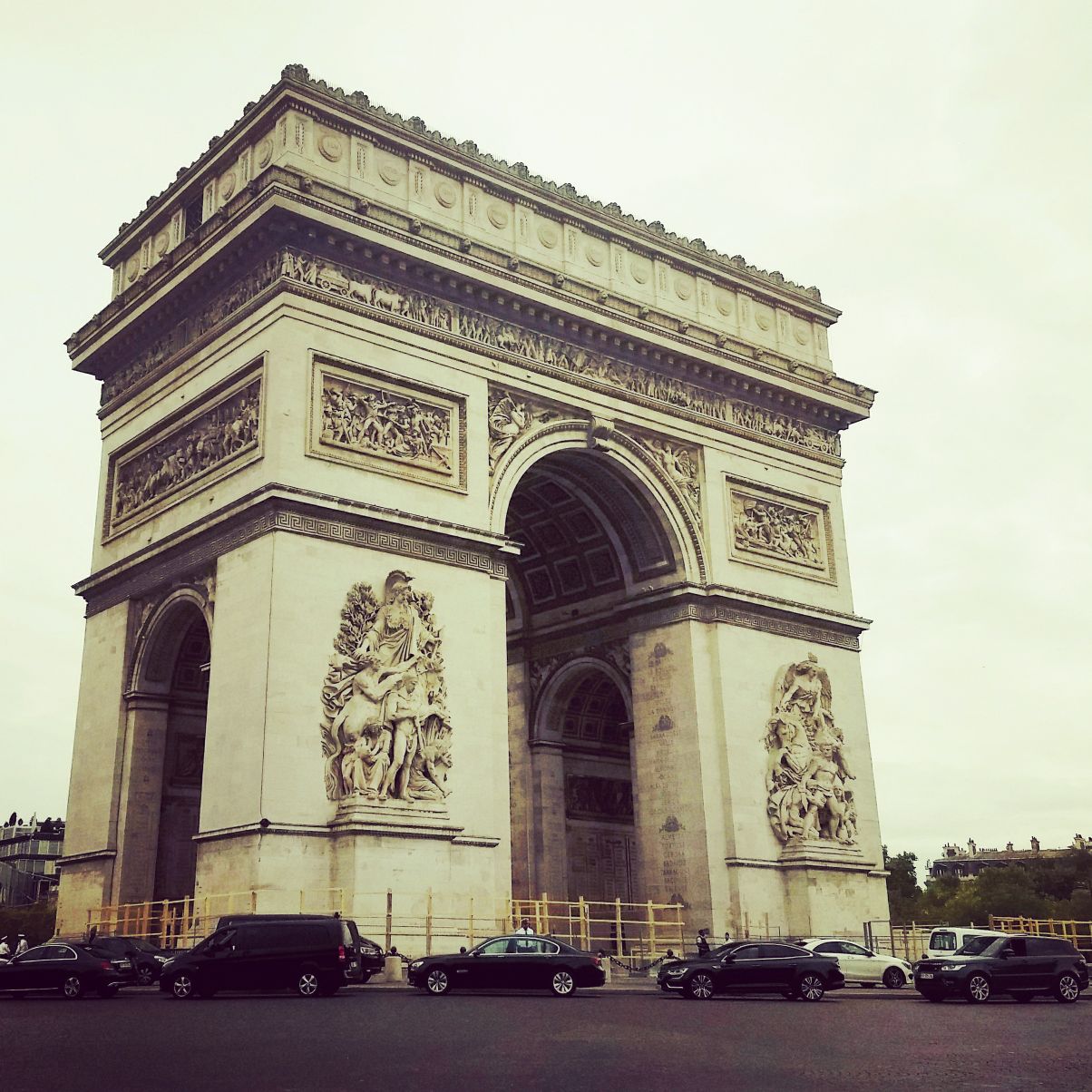 11. Walk around Latin Quarters and the Pantheon

The Pantheon is situated in another cute neighborhood of Paris. The Latin Quarters. Discover Walks conducts a nice tour of this neighborhood too. However, we couldn’t make it in time so we just took a walking tour just by ourselves. The Pantheon is a mausoleum that houses the remains of many distinguished citizens of France.

Pro Tip: The Paris Pass grants you entry to The Pantheon. 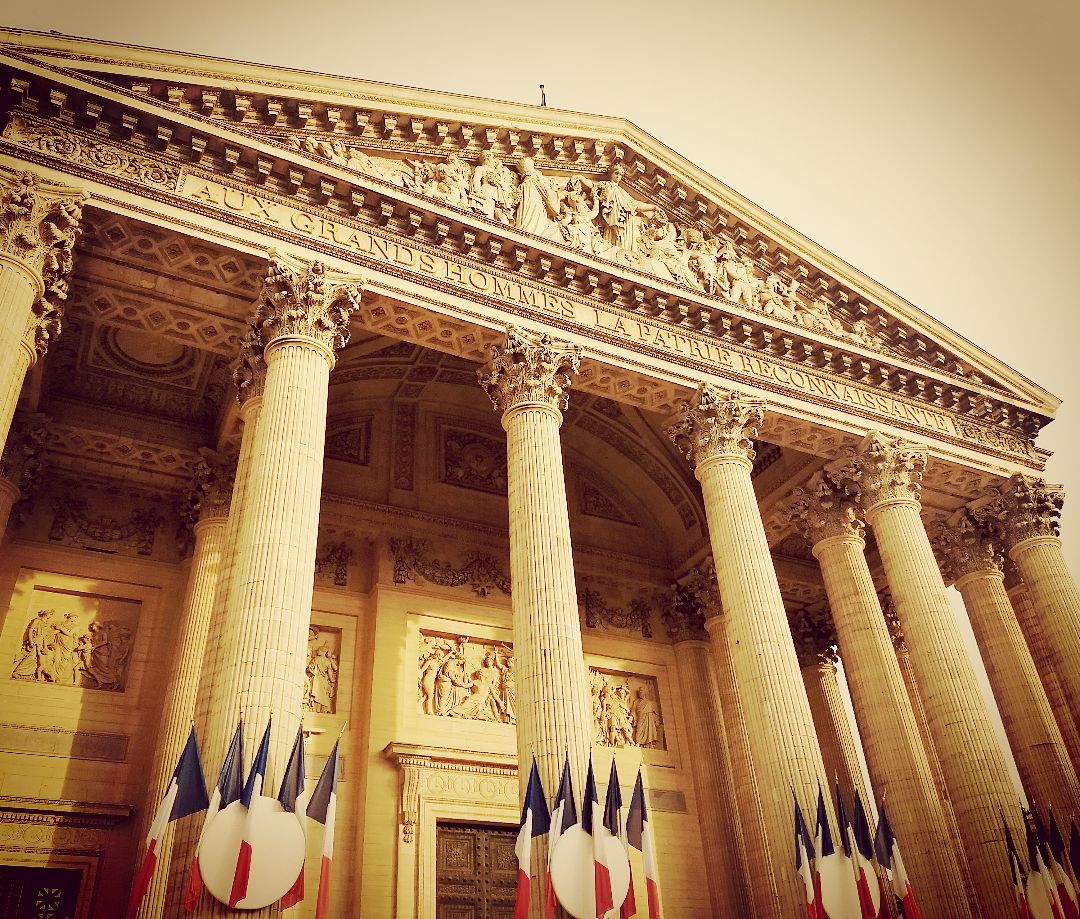 The Gardens of Luxembourg is a short walk from the Pantheon and is a beautiful place to spend your evening. 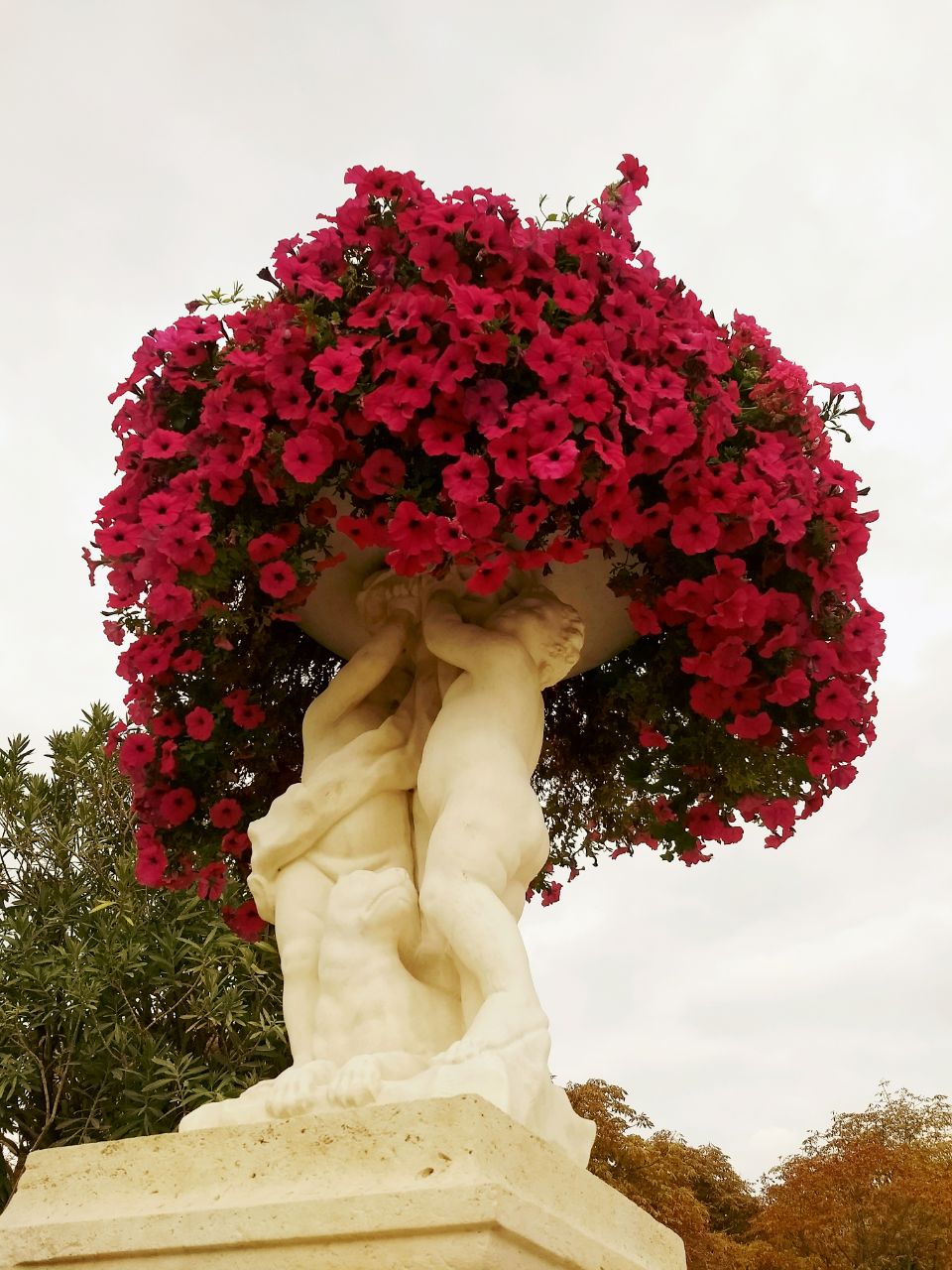 There’s a fountain at its center where you can see a multitude of ducks swimming by. The gardens are beautifully maintained and so is the mansion. It is the perfect place to have a romantic date or just enjoy some solitude. 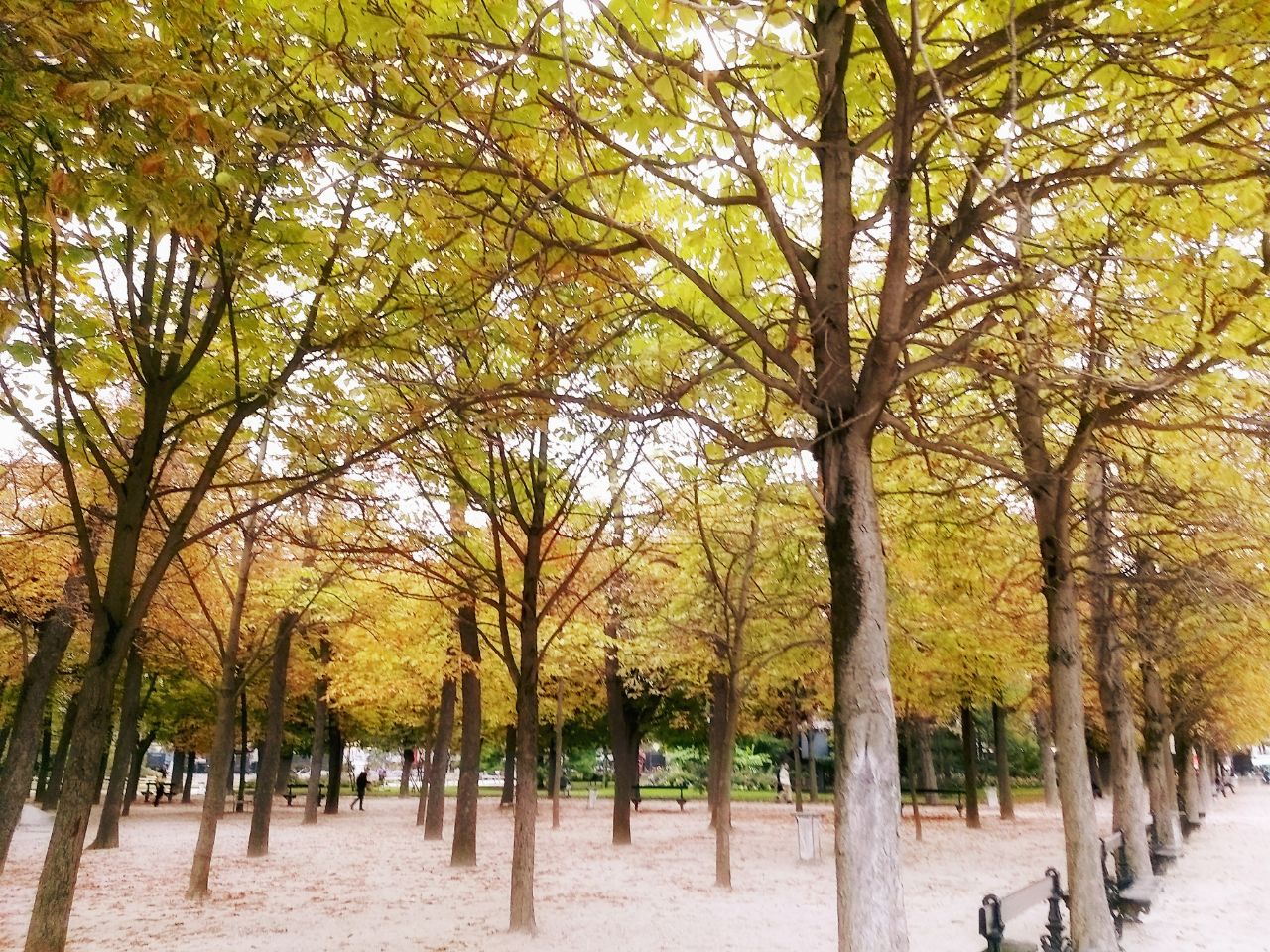 13. Marvel at the painted glass windows of Sainte Chapelle

This is one of my favorite things to do in Paris. To be honest, I was a little skeptical about visiting the Sainte Chapelle at first. However, I thank the lucky stars that I actually paid a visit to this amazing Gothic architectural monument. The 15 tall, painted glass windows of Sainte Chapelle, depicting scenes from The Bible, are its specialty. It is truly amazing to see the intricately painted designs and storytelling on the glass. Incredible craftsmanship! 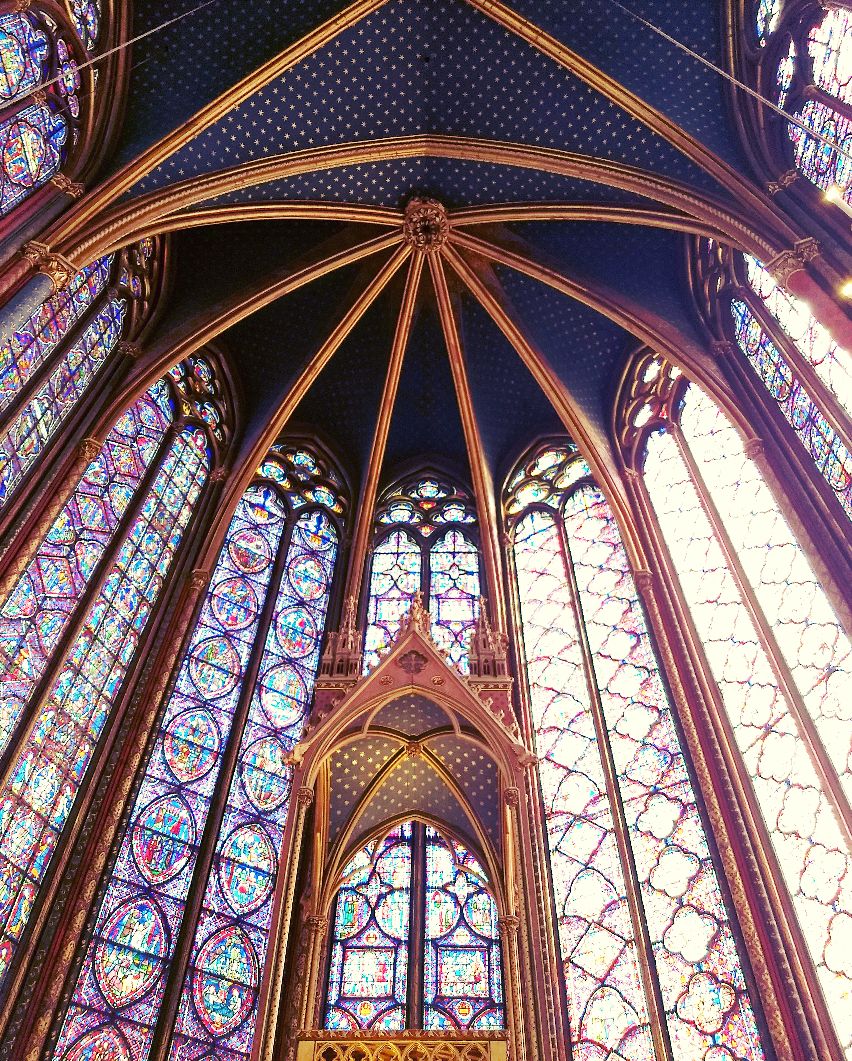 14. Take a tour of the Palais de Justice

Right next to the Sainte Chapelle is another marvelous Gothic building, the Palais de Justice. Perhaps the most famous prisoner that its walls held was Queen Marie Antoinette. You can still see the words Liberty, Equality, Fraternity carved on its facade. 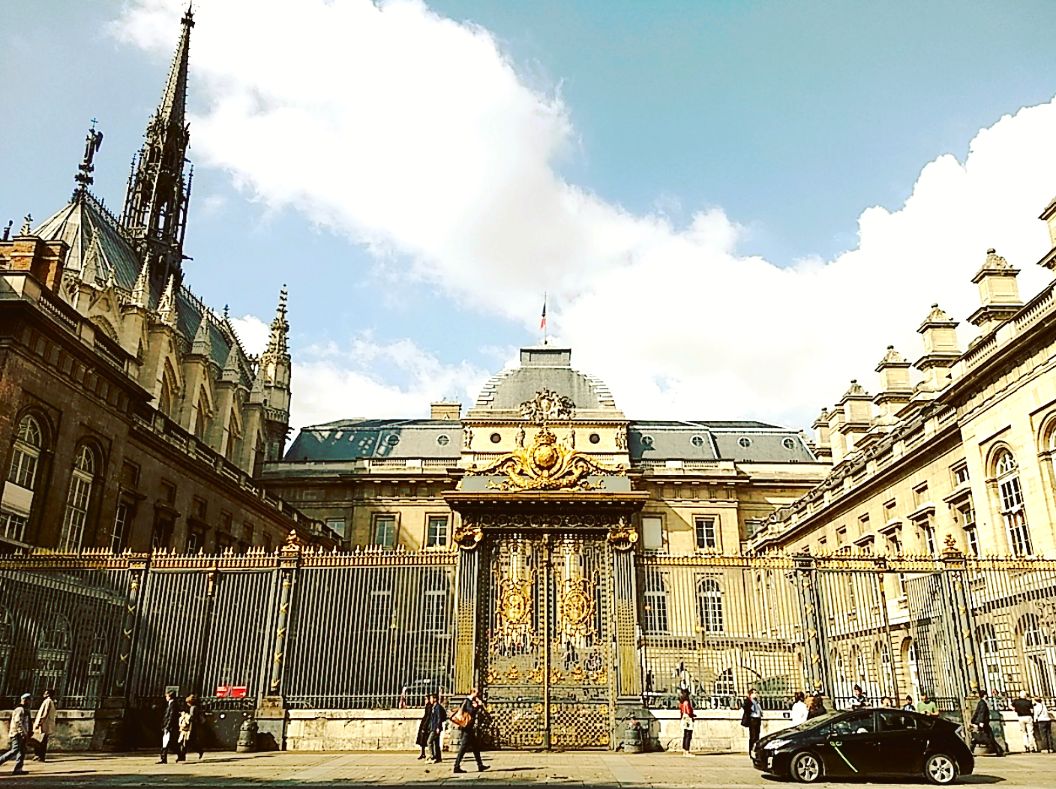 15. Spend some time at the Notre Dame Cathedral

When we talk about the top things to do in Paris, the Notre Dame Cathedral easily and rightfully makes it to the list. Not only is it one of the finest example of Gothic architecture, but also one of the largest and grandest churches in the world. Entry to the cathedral is free, while entry to the towers is chargeable.

PRO TIP: The Paris Pass grants you entry to the towers of Notre Dame Cathedral. 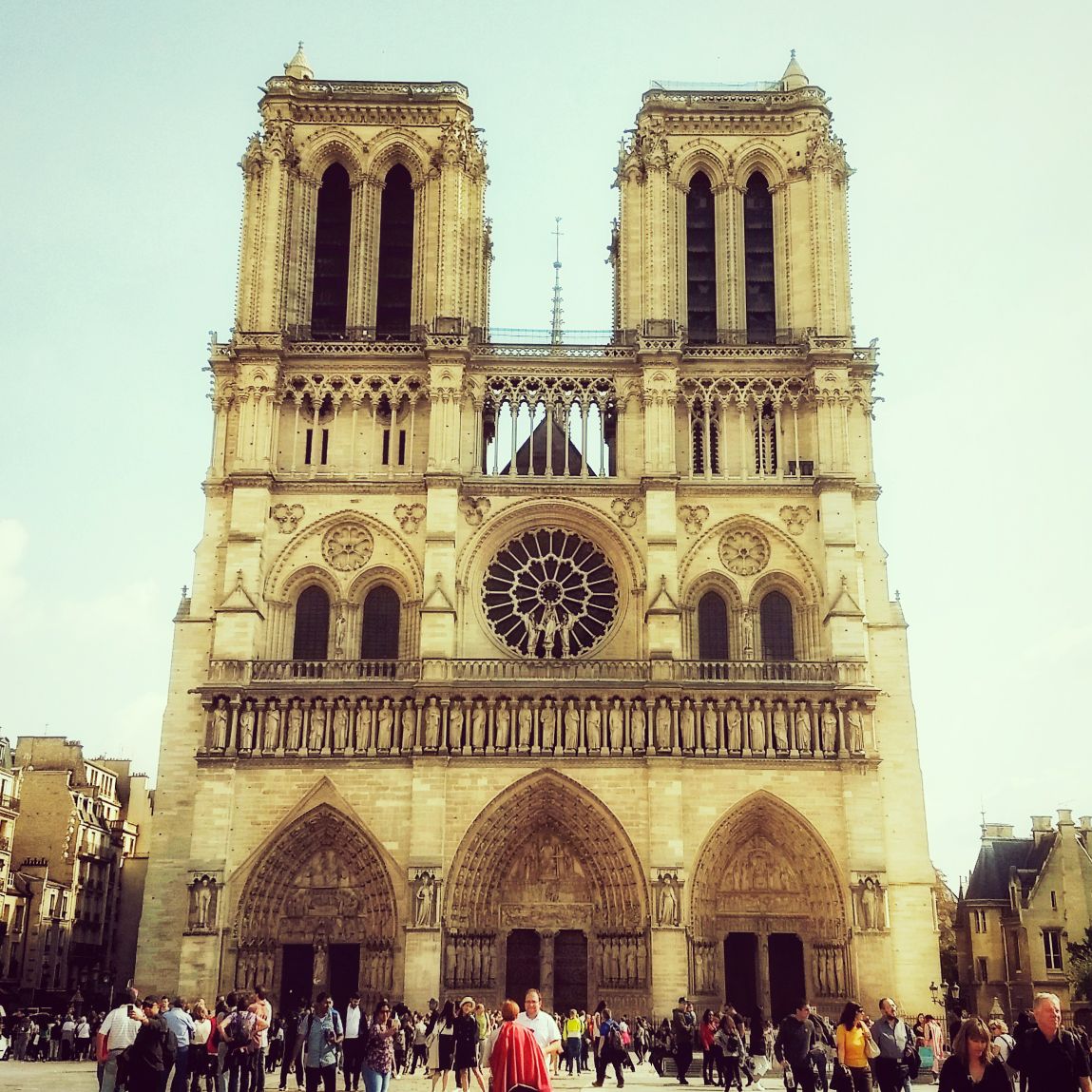 16. Take a tour of the Catacombs

If you thought Paris is only about the grand and the beautiful, get ready for something starkly different. Hidden beneath the streets of Paris is its macabre history in the form of an ossuary. The tunnels of the Catacombs cover a huge area. However, only a part of it is open to the public. If it were not for the other tourists, I would have completely freaked out here. An amazing experience nonetheless, and one of the best things to do in Paris. 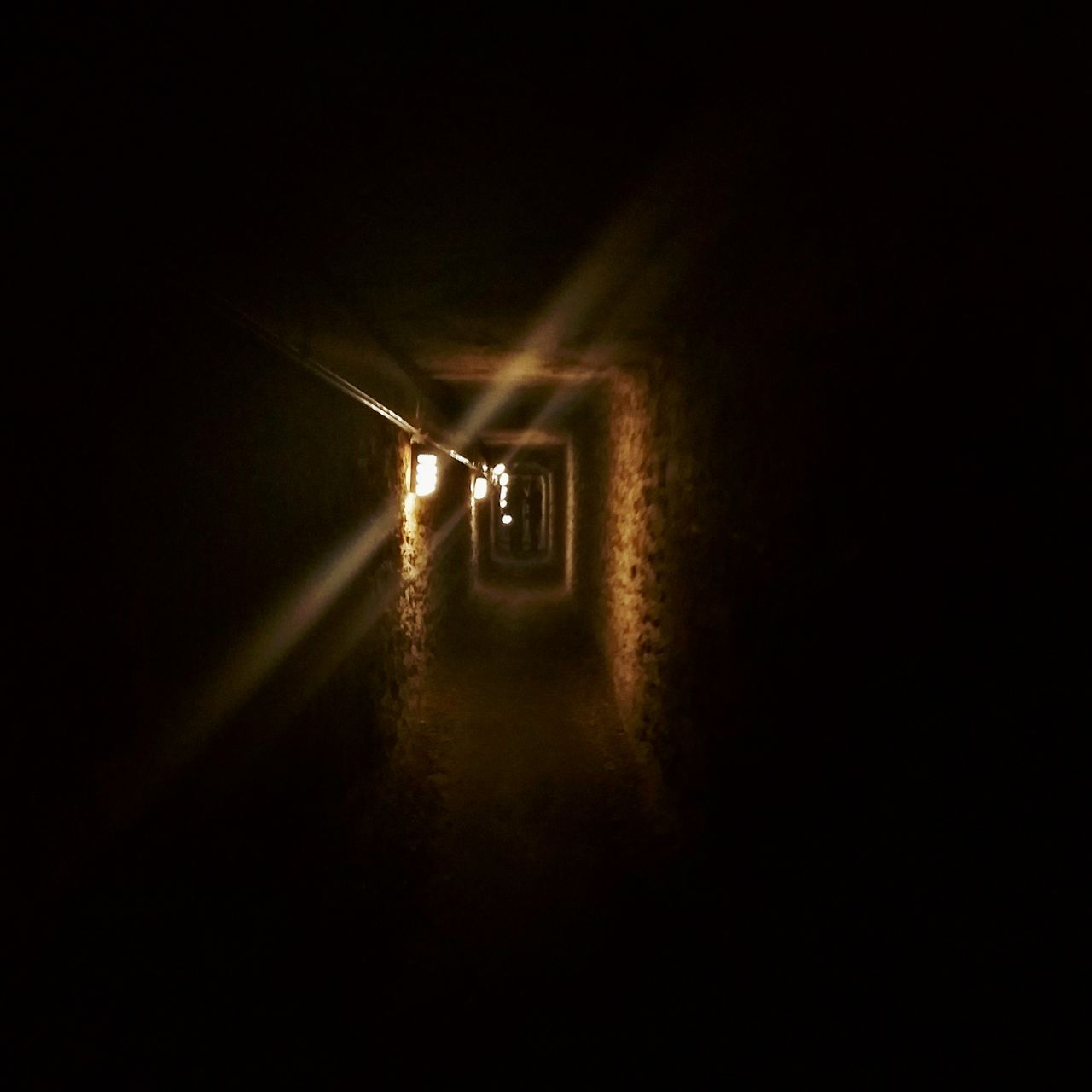 Enough about the macabre stuff. Let’s get back to something more cheerful. How does the idea of a photo shoot in the lovely backdrop of Paris sound? 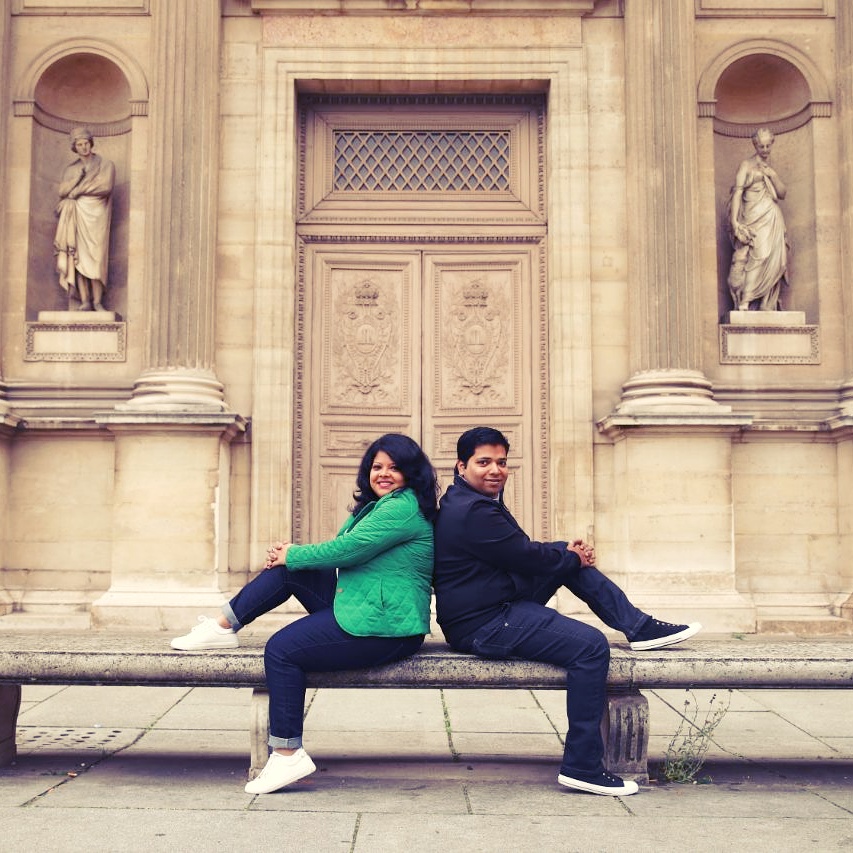 It’s an awesome way to make your trip even more memorable. I contacted Alex, an amazing photographer and a very friendly guy, who took us to some of his favorite spots around the Louvre and captured some great shots! 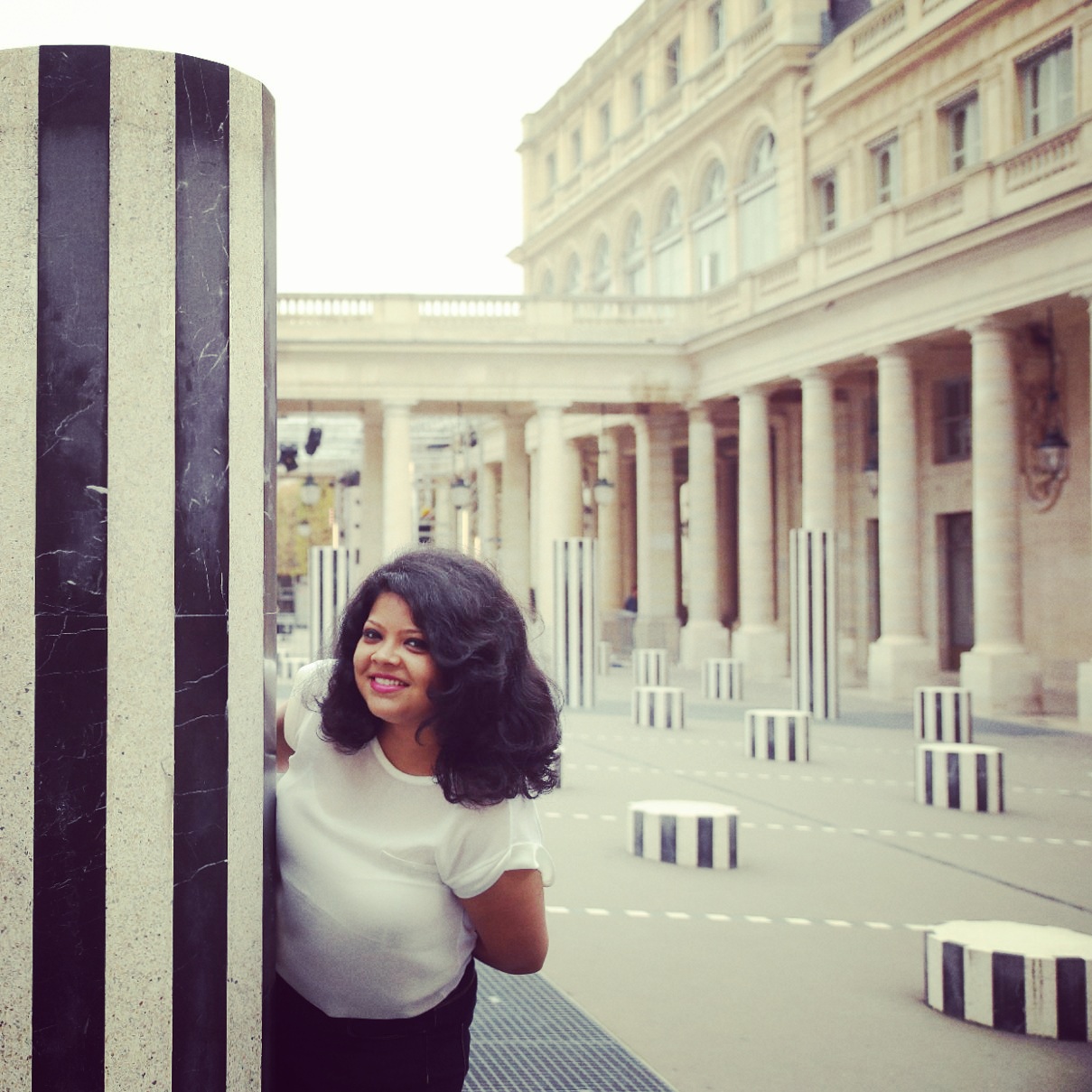 Smaller than the Luxembourg gardens but no less beautiful, the gardens of Tuileries is a great spot for catching a quick break. It’s beautiful, quiet, and serene. A welcome break from the hordes of people and crowds you’ll find everywhere else. 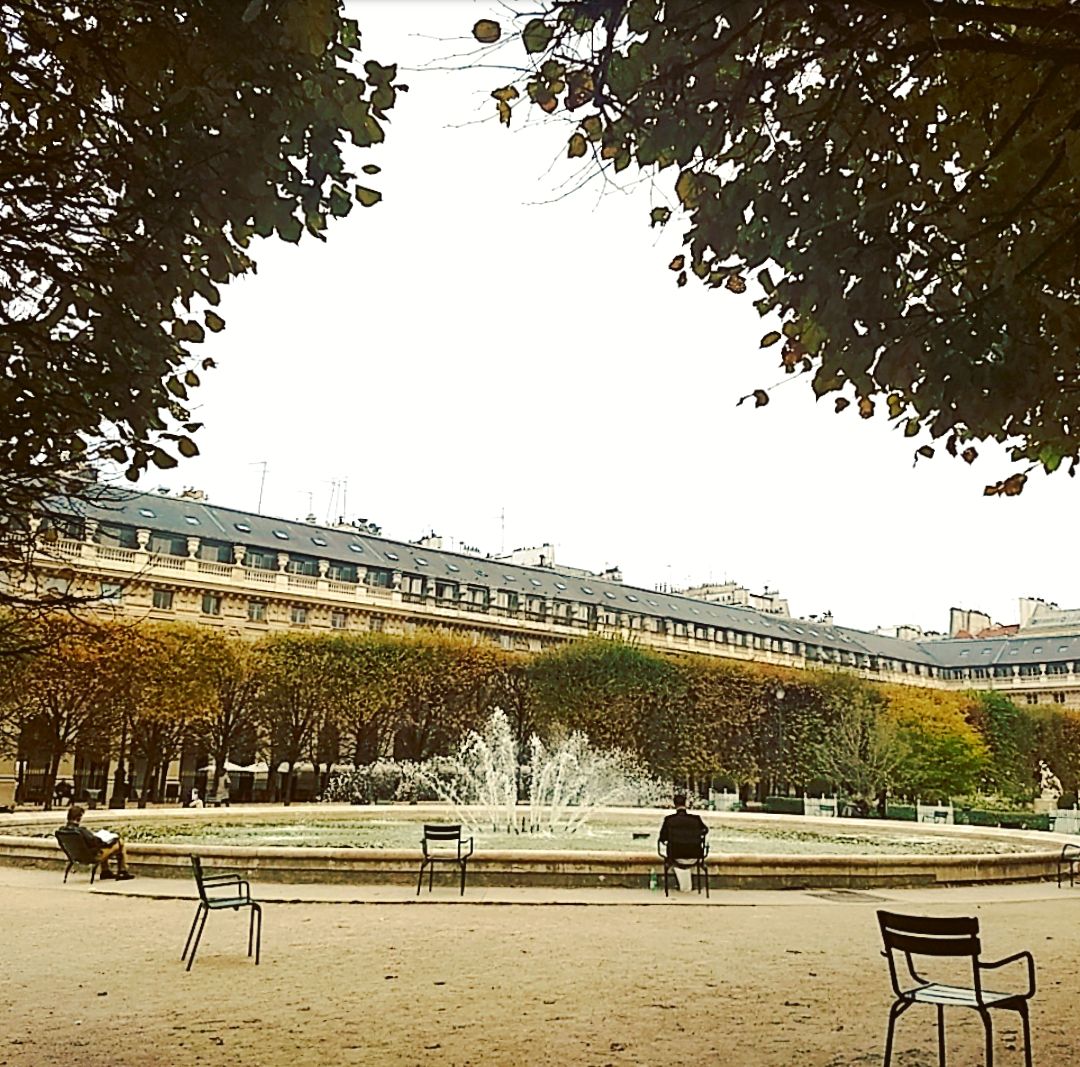 I’m not going to bore you with too much talk about the Louvre. Just a word of advice. Definitely, buy the tickets that allow you to skip the lines. We got ours at the tourist center in the airport. And don’t spend all your energy in the pursuit of the Mona Lisa. There are many more brilliant works of art and sculpture here.

Book your tickets to the Louvre here. 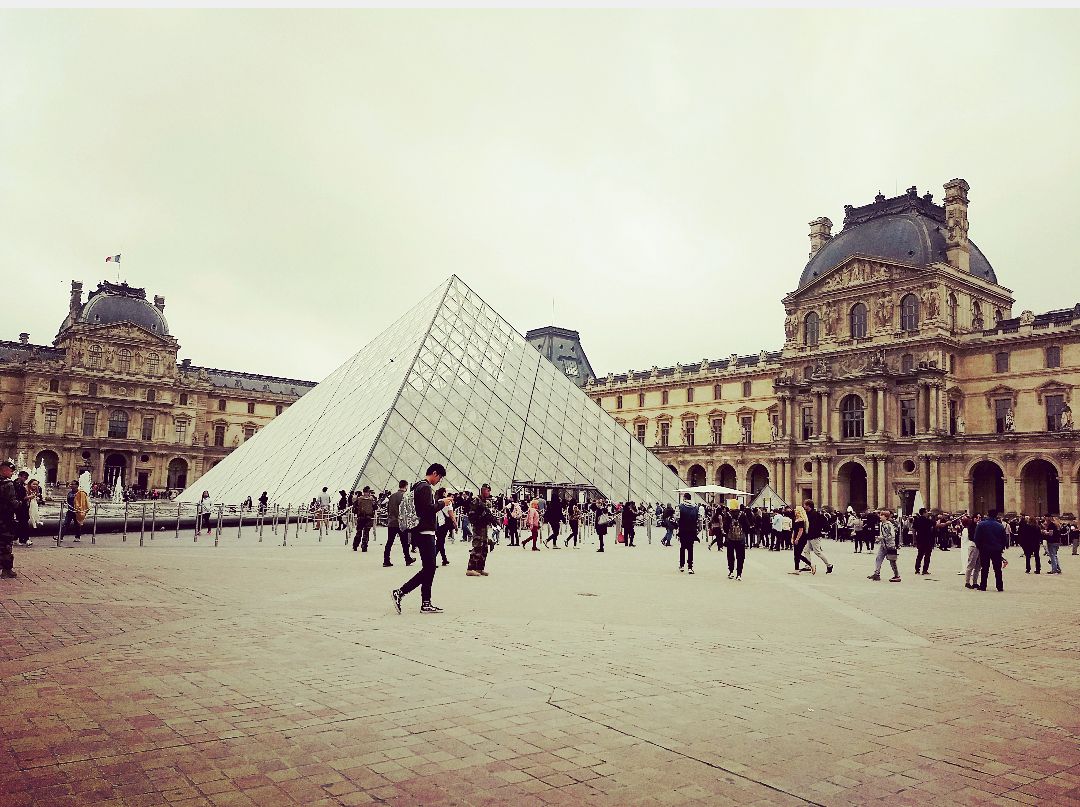 I would highly recommend the Seine river cruise as it’s a very different way of experiencing the city. It’s best experienced after sundown as the city lights up and transforms into a magical fairytale like setting. 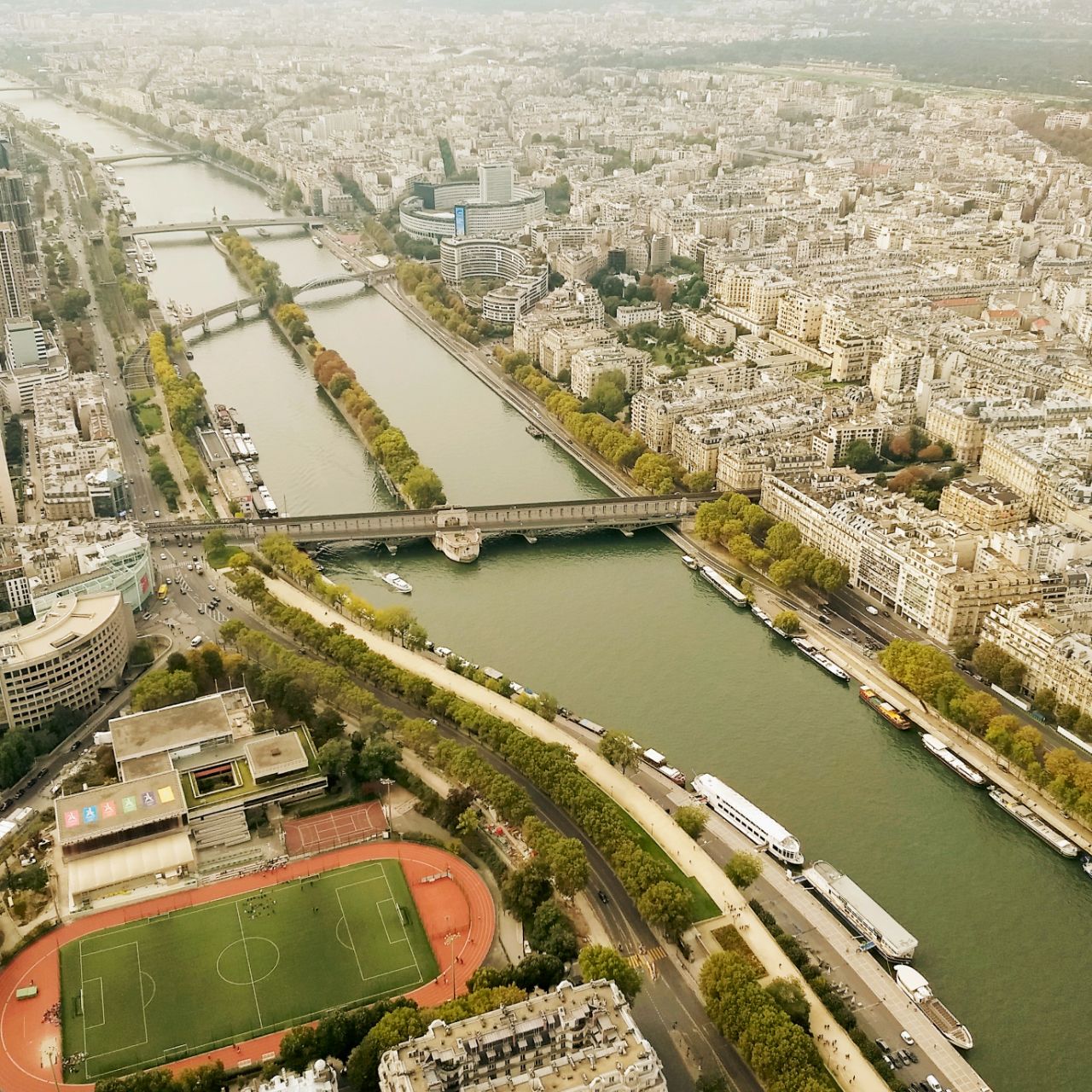 I know a lot of people will tell you walking is the best way to see the city. Unfortunately, it isn’t sustainable because there’s so much to see. So if you want to go a little easy on your feet and on your wallet, take the Metro.

Can you think of any more interesting things to do in Paris? I’d love to hear them. 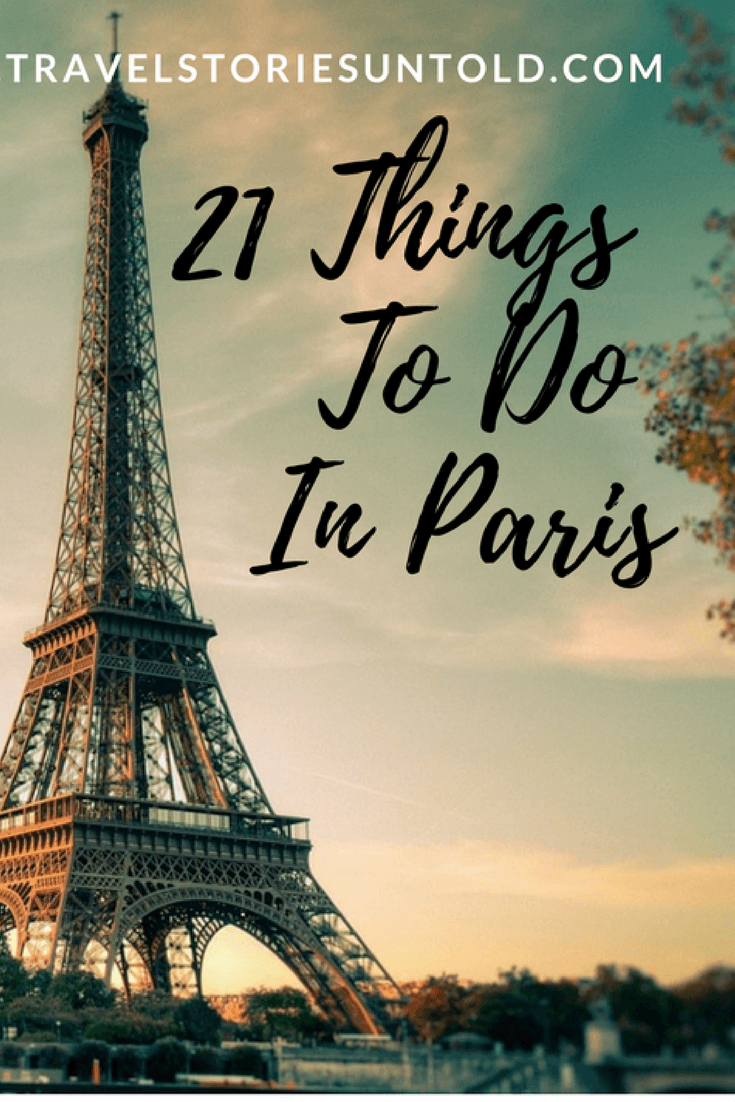